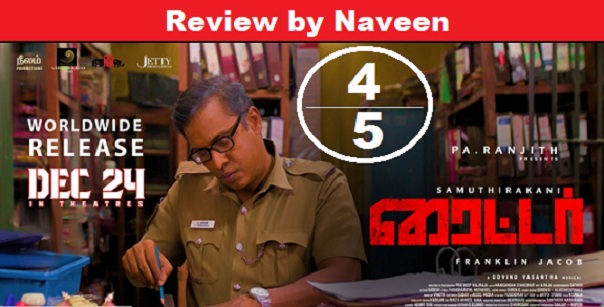 Samuthirakani is a police writer who is nearing his retirement. Samuthirakani fights to form a union for police personnel, meanwhile he gets the custody of a youngster who is accused wrongly.

Was Samuthirakani successful in forming the union, what happened to the youngster forms the rest of the story.

Directed by Franklin Jacob, the movie mainly focuses on the issues in the police department. He introduces Samuthirakani’s family in the first half and the movie slowly picks pace in the second half.

The second half is emotionally packed and keeps the audience thoroughly engaged. Though the plot is predictable, the way Franklin has packaged it is very interesting.

Samuthirakani is the biggest strength of the movie. He has clearly understood the character and has carried the role with authenticity.

He plays well as the man caught in between moral and duty.

Rest of the cast including Maheshwari, Hari Krishnan and Antony have all done their part well. Music by Govind Vasantha elevates the mood of the script.

Rest of the technical aspects of the movie are also good.