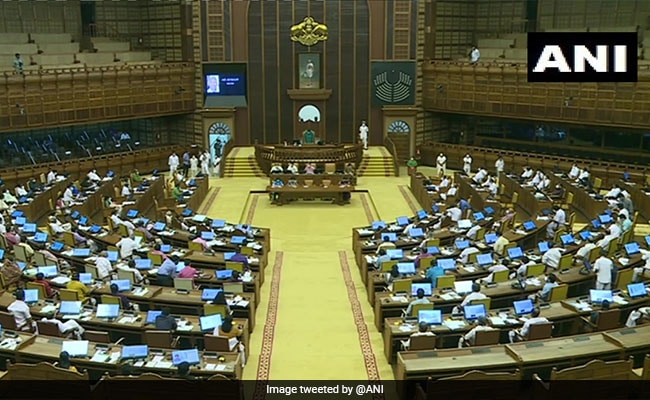 The Kerala Assembly on Monday morning unanimously passed a joint resolution demanding the removal of Lakshadweep Administrator Praful Patel over his alleged “anti-people” policies, and reminding the centre of its responsibility to protect the lives and livelihoods of the islanders.

The Assembly slammed the “move to give extraordinary power to those governing Lakshadweep to take over land and property” and underlined the need to remove Mr Patel and revoke his controversial orders.

“Attempts to further saffron agenda and corporate interests are going on… where crimes are minimal, measures have been taken to bring Goonda Act… attempts to destroy livelihoods like fishing and backdoor attempts to introduce ban on beef,” Chief Minister Pinarayi Vijayan said on the resolution.

“Lakshadweep is being turned into a laboratory – to test if such draconian laws can be imposed on people. The administrator must be recalled and his orders must be revoked. Through this resolution, Kerala must stand as a model before the country, against Sangh Parivar agenda,” he said.

There is growing political upheaval in Kerala over the Lakshadweep situation.

This includes bipartisan support against the changes being brought about in the union territory.

Such widespread support is being seen as crucial, since it is increasingly difficult to hear local voices, given the existing permit system and a lockdown imposed since a major Covid breakout.

“Kerala will have strong objections to what is happening in Lakshadweep. They are our brothers. It will be correct to have a resolution in Assembly in this regard,” Chief Minister Pinarayi Vijayan said last week, as he referred to the state’s centuries-old socio-cultural ties to the union territory.

The ruling LDF and the opposition UDF plan to send delegations of MPs to Lakshadweep to study the ground situation. However, neither’s delegation has been given permission to visit just yet.

“We have asked them… How long can they deny us permission?” Mr Satheesan asked.

Praful Khoda Patel, Lakshadweep’s newly appointed Administrator, is at the centre of a political row that has exploded over the past few days, with the ripples reaching as far afield as Delhi.

Mr Patel has been accused of banning beef products in a place where it is widely consumed, demolishing fishermen’s sheds in coastal areas (ostensibly for violating the Coast Guard Act) and revoking restrictions on the consumption of alcohol.

He has also removed non-vegetarian food from midday meals at local schools and hostels.

His administration says these measures are to promote tourism and ensure the island’s security.

“Strict and stringent laws are needed so young people are not misguided. People with vested interests are driving propaganda against such strict laws,” Mr Patel said in defence of his laws.

Political leaders in Lakshadweep and mainland India – such as NCP chief Sharad Pawar, whose party holds the island’s sole Lok Sabha seat, and the Congress’ Rahul Gandhi, who is an MP from Kerala’s Wayanad – have also opposed these measures.

“Livelihood, security and sustainable development are being sacrificed for commercial gains… Under the guise of development and maintaining law and order in a low-crime union territory, the draconian regulations penalise dissent and undermine grassroots democracy,” Mr Gandhi said.

Those opposed to the administration’s decisions have launched a “#SaveLakshadweep” campaign on social media, to which some film personalities and celebrities have extended their support.