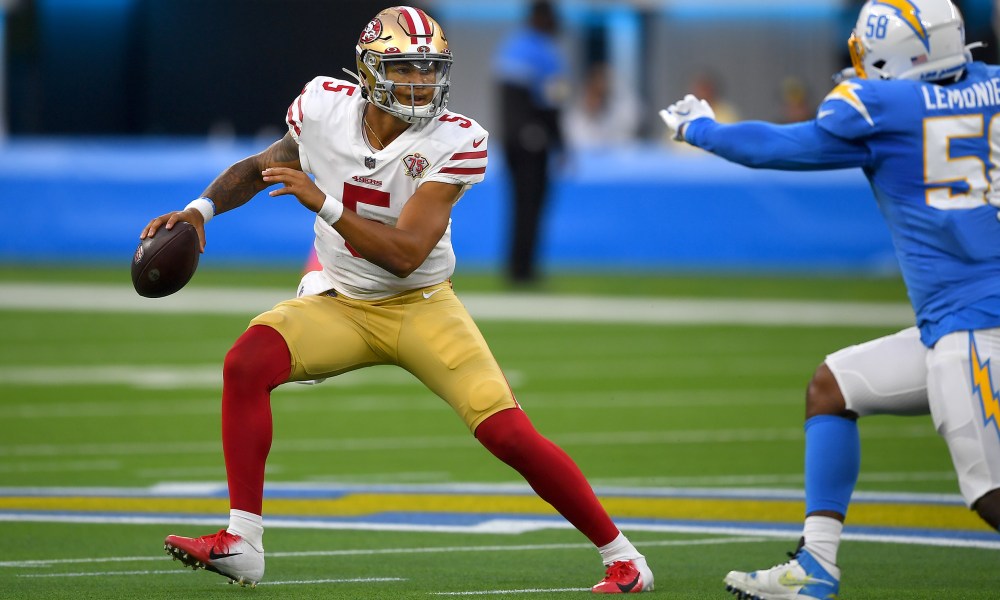 The 49ers’ battles continued their fascinating twists Sunday night in the team’s 15-10 victory over the Los Angeles Chargers.

There weren’t any appearances that would make or break players competing for prominent roles, but there were enough to give those fights a little shake up in the final week of the preseason slate.

Lance’s stock plummeted after a 1-5 start where he had only 9 yards and an interception. However, he bounced back in his next few series, finishing 8-14 for 102 yards and two touchdowns with one interception. His physical instruments were on full display and he looked more like an NFL signal caller than in the preseason opener. He may not have surpassed Jimmy Garoppolo on the depth chart, but he is making noticeable progress.

Garoppolo got only one series in which he performed 16 plays. That was all head coach Kyle Shanahan wanted the first team to get, so Garoppolo stopped coming on the field. Although he had a nice 10-yard scramble and dodged a sack, his performance was mostly not great. He went 3-6 for 15 yards and an interception which he delivered high to an open Brandon Aiyuk. The runway is still his for now, but it is clear that the gap between him and Lance is narrowing.

It was impossible to watch Sunday’s game and not notice the number 95 wreaking havoc in the Chargers’ backfield. Street’s name has been popular in reports outside the camp this year and he translated that into a big night at LoFi Stadium. He finished the game with three tackles, 1.0 sacks and two tackles for loss. Street could have a significant impact on the 49ers defensive front this year if he is healthy.

Thomas had two plays that excel for all the wrong reasons. First there was a game where he was beaten over the top for a 39-yard catch. The other was a pass interference penalty on a third-down pass breakup. His PBU was a nice game, but he used his hands a lot on the receiver, something that is marked on the boundary when it is directly in front of the umpire. Thomas has plenty of time to get his bearings on the NFL, but he stumbled out the gate.

Trent Sherfield, Travis Benjamin and Mohamed Sanu all played notable games on Sunday. Sherfield racked up a 41-yard reception on the 49ers’ first touchdown drive. He also had a nice catch from nine meters in traffic. Benjamin caught two throws from Lance, one for third and another for a 16-yard score. He was a bit of an afterthought this preseason, but he showed up against the Chargers. Sanu only had one catch for 5 yards, but he ran a really good route in the red zone to create enough space to give Lance an easy throw for his first touchdown pass of the night. The 49ers may not have the best WR Corps in the league, but it’s becoming apparent that group will have at least a little bit of quality depth.

Hufanga is still very much in the mix to start with strong safety, but his production on Sunday paled compared to what he did against Kansas City. His presence was less noticeable against the Chargers and he only registered one tackle and none on special teams, although his only tackle was a loud tackle on a run, shooting off the edge to clear the running back for a run. loss. USC’s fifth round pick set the bar high for himself with his play in the opener, and he didn’t quite reach it against Los Angeles. He will be a fascinating player to watch in next week’s final.

Gallman had a pretty pedestrian game against the Chiefs, but he was great against the Chargers. He contributed 15 times for 72 yards in a hard hitting, impressive performance that surpassed fellow RB JaMycal Hasty’s 19 for 58 yards. There’s a chance those two will compete for a spot on the list, and it was Gallman who had the more productive outing on Sunday. It’s going to be a fun battle to watch.